Replacing multiple tablets by an herb can be alluring. To that add, the low cost and versatility of the herb. We are talking about the uniquely spiced ginger, the century old spice of Indian kitchen, condiment and grandma’s medicine. We just published a blog about ginger successfully helping diabetes (1).
Scientists and health authorities have devoted years of research and have conducted multiple clinical trials to validate effectiveness of ginger as an anti-nauseating agent. Nausea is the sensation of unease and discomfort in the stomach with an urge to vomit (2).

Does ginger help with nausea? Let’s delve in and find out. 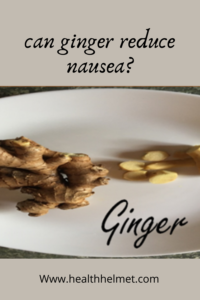 Ginger Eases the Nausea During Chemotherapy

Nausea is a common side effect of chemotherapy (3) resulting in loss of appetite. It could turn out to be severe based on the drugs used and impact nutrient intake which helps maintain the RBC, WBC and platelet level. This is badly necessary to continue with the next chemo.
It is fortuitous Ginger reduces nausea at various quantities improving the quality of life.

This is largest clinical trial that validates ginger as an anti-nauseating agent for chemotherapy (4, 5).

Gingers Alleviates Postoperative Nausea and Vomiting A cumulative result consolidated from 5 clinical trials consisting of 363 patients shows: A fixed dose of at least 1 g of ginger was effective than placebo for the prevention of postoperative nausea and vomiting and postoperative vomiting (6).

Abdominal discomfort was the only side effect (7).

Up to 80% of pregnant women suffer from nausea and vomiting during the first trimester of pregnancy. It is the so called morning sickness which for some gets resolved in 12 to 16 weeks. There are medications available to treat morning sickness. However, they are not popular because it may not be good for the growing fetus.

• Of the total 508 subjects, 256 and 252 subjects were randomly assigned to receive ginger and placebo, respectively. The use of ginger (∼1 g daily) for at least 4 days is associated with a 5-fold likelihood of improvement in Nausea and vomiting in early pregnancy (8), (9).
• Ginger extract can be used for the prevention of nausea and vomiting during cesarean section under spinal anesthesia (10).

• Ginger has been used for relief of pregnancy nausea for years. Vitamin B6 is a first line of treatment for nausea. When compared with ginger (47 patients treated with 250 mg daily 4 times Vitamin B6 (40 my twice daily). There was no difference in performance between the two.
• Ginger was found to be as effective as antihistamine drug. Dimenhydrinate with fewer side effects.
• The effects of ginger were not significantly different from those obtained to the drug Metoclopramide.

Metoclopramide relieves symptoms such as nausea, vomiting, heartburn, a feeling of fullness after meals, and loss of appetite. It works by increasing the movements or contractions of the stomach and intestines.

The researcher culminated: Ginger could be a possibly effective option for women with NVP, although large standardized trials are necessary.

In a study using double-blind, randomized, placebo-controlled protocols to compare the action of two doses of ginger: 1 g of ginger powder was shown to be as effective as 2 g of ginger powder in reducing motion-induced nausea, with both doses being significantly more effective than the placebo.
(11).
It is interesting to know that current antimotion sickness medications, including antimuscarinics and antihistamines, are partially effective in controlling the symptoms and show side effects such as dry mouth, lethargy, and drowsiness.

HIV positive patients participated in a random double blinded manner. Participants received 500 mg ginger or placebo two times per day, 30 min before each dose of antiretroviral regimen for 14 days. The severity of nausea was assessed.

A total of 46 and 29 of the patients in placebo and ginger groups experienced some degree of nausea during the first 2 weeks of antiretroviral therapy (ART), respectively.

• Frequency of mild, moderate and severe nausea was significantly lower in the ginger than placebo group.
• Also, 24 and 5 of the patients in the placebo and ginger groups reported at least one episode of vomiting during their time on ART, respectively.

Ginger was effective in ameliorating of antiretroviral-induced nausea and vomiting.

A randomized controlled trial in patients under anti-tuberculosis treatment has shown that ginger could alleviate nausea related to anti-tuberculosis drugs. They experienced less but not drastically significant effect with respect to placebo. This was the only study done with 30 patients (16).

Based on established scientific studies, validated by several clinical trials ginger is
Effective, helps prevent / reduce nausea in multiple diseases, safe to use to prevent nausea and vomiting in and during chemotherapy, motion sickness and early pregnancy and various other cases.

Take the advice of your doctor before you start using it.